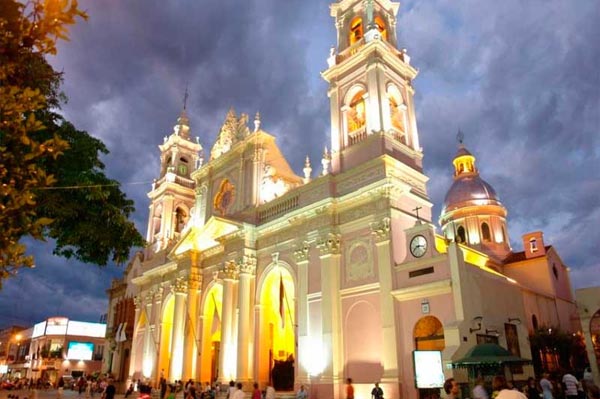 A tour around the places of greater attractive of the cityand surroundings . The city itself is absolutely charming. Founded in 1582, it still keeps a colonial style architecture, framed by hills. It is the right place to learn about an important part of the country’s culture and past. We can start at the the main square 9 of July You will see historic houses, such as the St Bernard Convent, which is the oldest religious building in Salta, with its door made of carob tree and carved by natives. It is a treasure of art from this province. St Francisco Church tower is 53 m high.. Then, we should quote the imposing Cathedral –keeping the human remains of General Martín Miguel de Güemes, the local hero in the independence struggles. Quite near it is Saint Francis Church, one of the most beautiful catholic churches in the North: built in 1796, it combines Baroque style with Italian neoclassic ornaments.Moreover the High Mountain Archaeological Museum (MAAM) is one of the obliged sites to visit in Salta. It keeps a really valuable archaeological treasure, witness of the Inca’s presence in the area: the Llullaillaco Children, found at the volcano of the same name at 22,000 f.a.s.l. They had been offered in sacrifice more than 500 years, together with gold, silver and clothes, at the highest Inca sanctuary known so far. Besides, the MAAM proposes an original tour that will convert the visit into an unforgettable memory. While touring, you will reach St Bernard Hill. At its foot, facing the city, the General Güemes monument stands out, carved into stone obtained from the same hill and with the bronze figure of the hero on top of it. You will see the Catholic University, the Vaqueros River, The Castellanos Gorge, Lesser, until you reach the picturesque San Lorenzo Village, a relaxing and appreciated place to enjoy summers in Salta. It is located in the yungas (sort of mountain forest) area, very close to San Lorenzo River, to the northeast of Lerma Valley, where a beautiful landscape and picturesque estancias, together with attractive houses, can be appreciated.
The San Lorenzo Ravin is a place to see, with its high altitude vegetation that is covered with fog during the summer and is typical of the yungas area. On your way back, you will visit the Crafts Market in Salta. Salta has its Handcrafts Market at an old house of the 18th century.

If we don't reach the minimum of 2 passengers, we will contact you to offer different choices